Global Association of the Exhibition Industry (UFI), Oxford Economics and SISO (Society of Independent Show Organizers) have released the global economic report on impact of exhibitions. It is the first study which covers the regions of Africa, Asia and Pacific, North, Central and South America, Europe and Middle East.

A total exhibition industry contribution to global GDP in 2018 amounted to 167 billion euros. The organization of 32,000 fair trade events in 180 countries provided 3.2 million jobs and gathered 303 million visitors, as well as 4.5 million exhibitors. 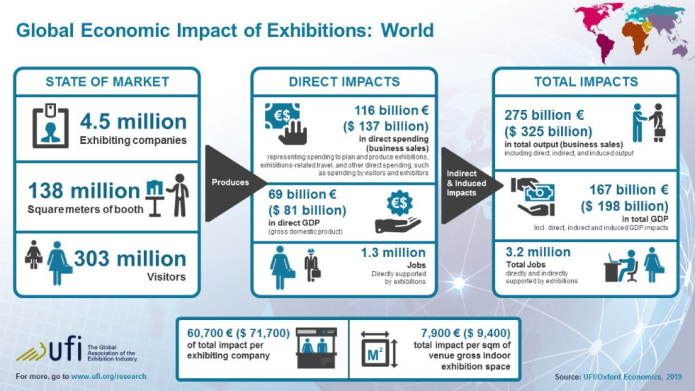 Europe and North America represent the leading regions in the exhibition industry worldwide. The highest concentration of visitors and exhibitors has been observed in Europe, 112 million and 4.5 million people accordingly. On the other hand, North America region is the largest economy in terms of the GDP produced  (78.2 billion euros) and a total employment share (approx. 40%)  in the global exhibition activity.

The top 10 countries with the highest GDP generated by trade fair activities include the United States, China, Japan, Germany, France, the United Kingdom, India, Brazil, Italy and Canada. Poland was ranked 24th on the list.

A full report can be downloaded from the UFI website at www.ufi.org/research.